The coat of arms of Edward the confessor

Posted on October 29, 2010 by mikespassingthoughts 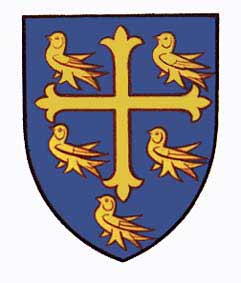 The coat of arms used by Edward the Confessor was never actually used by him as heraldry did not exist at that time. It was created several centuries later. The first use of it that I’m aware of is by Richard II, in the late 1300’s, who used it as part of his coat of arms. As near as I can tell it was created at that time. The design supposedly comes from the reverse of one of Edward the Confessors coins which had a cross with birds (called Martlets) in each quadrant.