Exhumations of Edward the Confessor

Posted on April 8, 2011 by mikespassingthoughts

Over the centuries Edward the Confessor was exhumed a number of times.  These are the ones I’ve found:

1098 or 1102 – Henry I opened the coffin to see if his body was ‘incorrupt’.  They say that he was fresh with his cheeks still rosy cheeked.  His skin was soft and his joints could be moved.  Recently, they’ve discovered that this original tomb is directly below where the existing one is now.  Here is a site which describes it:

1163 – Henry II moves coffin to new shrine.   It was opened.  His robes were removed and made into three copes.  The pilgrims ring was also removed.  He may have been placed in a shrine similar to the one Henry III erected in 1269.   Below is a picture from 1255 which shows what this tomb may of looked like: 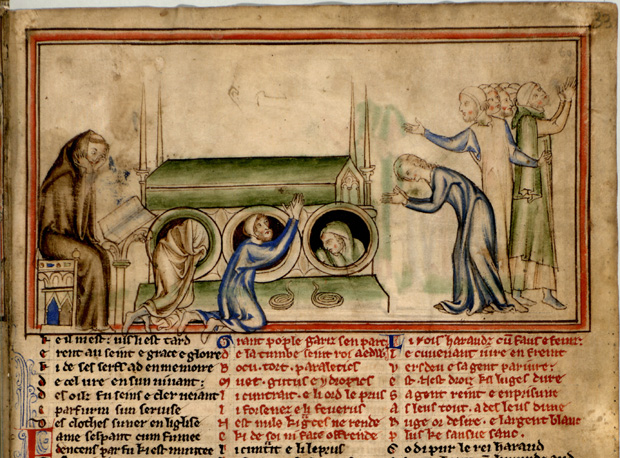 1269 – Henry III moves coffin to a new shrine.  This shrine is the one that exists today.  It is shown below:

Reformation – Henry VIII seizes the jewels on the shrine.  Apparently, the inner contents of the tomb was not disturbed.  Later, Queen Mary restores shrine.

The tomb has not been opened since.