Thoughts on an idea concerning the origin of the Norse god Thor???

Posted on September 25, 2013 by mikespassingthoughts

The other day I had a wild idea about Thor.  I was laying down in the dark wondering about some conflict I was having.  Then, in a flash, this idea came to me.  Where it came from I don’t know.  None of it can be substantiated or proven, I think, but it’s so wild and unusual it seems worth writing down, even though it is probably wrong.

The whole basis of this idea is on something that I had heard.  I cannot recall where it originated nor have I heard of anything similar anywhere else, which makes it even more ‘questionable’.  Not only that, I’m not sure if my memory is all that accurate.  It stated that, in the past, people in Norway used to find what they claimed were Thor’s hammer in the woods.  These were small “hammers”, maybe a couple of inches long at the most.  They did not resemble a hammer at all, I believe, but often looked more like an arrow, much like the runic emblem for Tyr: 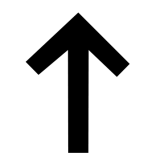 They were made, I believe,  of either stone and metal.

These appear to be the tips, probably, of spears that were probably used for hunting (as I don’t think the Vikings had bow and arrows in the early years).  Finding them would not be a lot of different than finding Indian arrow heads, remnants of former hunts.  Because they were so small, supposedly, people began to wear them around their neck as amulets starting the trend of wearing an emblem of Thor’s hammer.

If this did, in fact, take place, it may have been that the people who found these old spear tips “assumed” it was Thor’s hammer because of the resemblance, not knowing they were spear-tips.

But I wondered if there was another explanation.  It made me question if Thor’s hammer may have been the tip of a spear, originally, and that it changed into a hammer over time.  This is rather interesting as it would give a whole new twist to Thor.

Let us suppose that Thor’s hammer was a hunting spear-tip.  This would mean that Thor was probably a “god of the hunt” or had something to do with hunting originally.  If that is true then there was a great change in the image of Thor over the years.

It’s possible that the killing of giants, which Thor did so avidly,  is a remnant of hunting.  In this case the giants are a reference to game.

It’s quite interesting in that many of the known symbols of Thor’s hammer resemble the Tyr-like emblem, being somewhat pointed, possibly a remnant of the spear-tip: 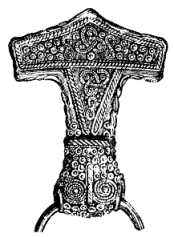 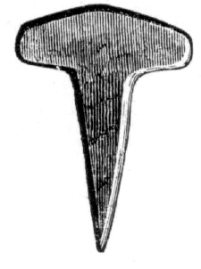 (An amulet of Thor’s hammer from Fitjar, Norway)

The origin of Thor’s short handle being a result of Loki turning into a fly and biting the  hand of the dwarf Brokkr as he made the hammer may be a way to explain the short shank of the spear-tip.

The myth of how Thor eats his own goats may be a reference to his early association with eating game.

In this same myth Thor touches the goats with his hammer and they come to life again.  This may show a signficant element in Thor-as-a-hunter-god.  It shows a ‘magical association’ between the weapon (hammer, spear-tip) and game.   This gives great magical power and importance to the item that weapon that will kill the game, which is not unusual in primitive-like societies.  In some places, they think the weapon has such power that it practically draws game to it.  It’s possible that this ‘magical association’ of weapon/game is the basis of Thor which would make him, in a way, a “god of the hunting weapon”.  As a result, the weapon is given great power and dominance.  Because of this, Thor’s hammer is given great magical power and influence.

Thor’s hammer coming back may refer to a possible Norse belief that one must always retrieve ones weapons.  This is mentioned in “King Gautrek’s saga”.  This may be another reference, even, to the importance of the magical association between weapon and game.

CHANGE IN SOCIETY=CHANGE IN THOR

Perhaps as the Norse society became increasingly agrarian and fishing-oriented the importance of hunting game in the forest waned.  As a result of this, the hunting association with Thor faded.  This may be why Thor is more pronounced in Norway because it was not as suitable for farming as Sweden or Denmark, because of the fjords and deep valleys.  As a result, the early Norwegians may of had to hunt in the forests for a longer period of time making the need for Thor more critical in this area.  Sweden and Denmark, on the other hand, had become agrarian decreasing the value of hunting and the significance of Thor.  As a result, Odin became a dominant god in these areas.

If Thor was a “god of the hunting weapon” its possible that, when they changed to a more agrarian society and hunting waned, the emphasis changed from the weapon itself (as they weren’t hunting much anymore) to the manufacture of the weapon – blacksmithing.  This created an association of the blacksmith’s hammer with the spear-tip which, over time replaced it.  As a result, the spear-tip changed into the blacksmith’s hammer which became Thor’s hammer.

Along with this association to blacksmithing Thor’s would become associated with sparks, no doubt coming from when the blacksmith hammers the metal.  This created Thor’s association with lightning and other things that makes sparks.

When the tribal wars began to get fierce (which would later turn into the Viking invasions), its possible that the image of Thor may of slowly turned into a strong powerful warrior that we know today, who battles giants.

I’ve often speculated that Odin had a lot to do with hunting originally because of how sacrificial victims were often stabbed with a spear.  But, if Thor was associated with hunting, this would mean that there is an association with both Thor and Odin with hunting.  I would be inclined to think that Odin was a god who they sacrificed to for a good hunt and Thor was a god who was involved with the hunt itself, in the magical significance of the weapon.  Though they both involve hunting they are not the same functions.  But, despite this, its possible that this may have created a ‘slight rivalry’ between Odin and Thor, which is casually mentioned in some of the myths.  It may of even gone beyond the myths and created a religious rivalry between Norway and Sweden/Denmark.

3 Responses to Thoughts on an idea concerning the origin of the Norse god Thor???