Posted on October 30, 2019 by mikespassingthoughts

There are a number of things that have a great impact on the development of modern mentality.  These are:

These have blended together and created a culture I often speak of as the Bourgeois/Victorian Culture which is the basis for much of modern mentality.  From my observation, this culture is a somewhat self-destructive, undermining, and alienating culture (see my articles Thoughts on “bourgeois society” – its effects, problems, and reactions toward it and More thoughts on the bourgeoisie mentality – the influence of the “culture of sychophant’s”  and  Thoughts on the ‘imitation of nobility culture’).  As a result of this, I tend to view Bourgeois/Victorian Culture as a destructive type of culture.  Its destroyed identity, belief, tradition, culture, etc.  In its wake it tends to leave a broken down humanity and culture.  As a result, I have inquired much into the origin of this culture.

As part of this inquiry, I have found that two male character types that appeared in the 1700’s, the “macaroni” and “dandy”, may have had great influence and may have helped to set the stage for the creation of the Bourgeois/Victorian Culture.  At the very least they seem to reflect the mood right before the creation of the Bourgeoisie/Victorian Culture and reveal qualities about its origins.

In the mid-1700’s there developed a character of man often called a “macaroni” in England (the term appears to of been first used in about 1764).  It seems to of originated from the “grand tour” in which many young British aristocrats started to do in the late 1600’s.  They would travel over Continental Europe, primarily with the intention of being exposed to European, particularly Italian, culture.  In this way, they became exposed to many attitudes, ways, artwork, architecture, etc. of Continental Europe which became viewed as a sign of being “cultured”.  This was particularly true with Italy.  Macaroni was a food in Italy that was not, of course, in England.  As a result, “macaroni” seems to of became an expression for people who dressed, and acted, important probably because they were exposed to the ways of Continental Europe . . . they’re more “cultured”.  After a while they started to develop a style of dressing and acting all their own.  As a result, anyone behaving in that way were often said to be in the “macaroni club”.

They become so obsessed with these that they literally turned them into an art form and a way of life.  This new “art form”, so to speak, would establish qualities that they are remembered for today, particularly a strong sense of fashion and a strong and vain self-importance.  But these, in my opinion, are only the more overt memorable qualities that have come down to us today.  As we’ll see below, there is more to the development of this character as well as the character that followed it . . . 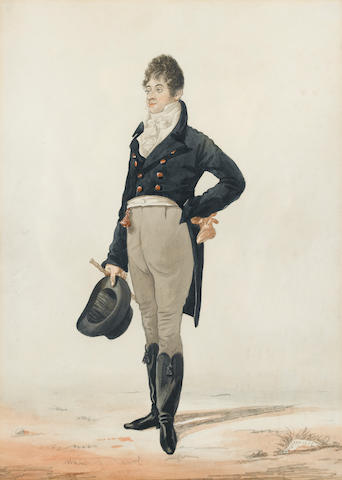 Just like the “macaroni” the “dandy” turned these ways into an art form, and are best remembered for being impeccably dressed, with perfect manners, and with an over-inflated view of themselves.

These effects appear in the late 1700’s and, in many ways, reflect Regency England.  The “macaroni”, on the other hand, is really a pre-Regency phenomena.  The “dandy” also aren’t necessarily aristocrats but were often common people.  The “macaroni” appears to primarily be aristocrats.  In this way, it shows that the change from “macaroni” to “dandy”, in the late 1700’s, was the beginning signs of a change from a behavior that was exclusively aristocratic to an aristocratic behavior that was being imitated by the common people . . . the bourgeois mentality.  This imitation would grow and grow so that, into the 1800’s, it would be done by most of the population where every Victorian must dress and act properly, and are imitating aristocratic ways.  In this way, we see that the “macaroni” and “dandy” reveal a pivotal change in the bourgeois phenomena.

It seems that there are a number of themes associated with the “macaroni” and “dandy” that have originated from the historical progression of this phenomena:

1 – A feminish quality in males apparently origination from early medieval France. Many male aristocrats became almost female-like.  This even carried over into England at times.  This seems to of persisted in the French aristocracy.  (See below.) 2 – When the French King Louis XIV took control of France, in the late 1600’s, he bestowed honors and privilege to people as a way to control the aristocracy.  This ended up creating a sycophantic society which caused a tendency of great sycophancy, sucking up, and imitation in the French aristocracy.  The power and popularity of France, during his reign, made these sycophantic and imitative attitudes spread to other parts of Europe, including England.

3 –The rise of the power of France, in the reign of King Louis XIV, appeared to increase the tendency of aristocratic males being feminish that originated in medieval times.  This is why many French males were feminine-like during the 1700’s.  As a result, the aristocratic male became particularly concerned about his looks, manners, etc. during this time.

What we see, then, is a progression that has lasted centuries.

In this historical progression, we several important themes:

From these, it seems to me, originate the various qualities of the “macaroni” and “dandy”.

Overall, these themes seem to reflect qualities seen in “court culture”, particularly of the French court more or less showing that the “macaroni” and “dandy” are products of the “court culture” of the 1700’s.

The “dandy”, in particular, seems to of carried on into the 1800’s.  The “macaroni”, being strongly aristocratic, probably died with the French Revolution.  The “dandy”, being more rooted in the “common man”, survived the French Revolution and probably flourished as a result of it.  This would help establish a tendency, in the common people, of imitating the nobility and aristocracy which would be a trait of the Bourgeois/Victorian culture.  In fact, one could very well say that Bourgeois/Victorian culture is really a form of “popular dandyism”.  We see a similar qualities seen in dandyism:

In many ways, the Bourgeois/Victorian culture is a form of dandyism that has been modified to suit the masses.

A number of things seemed to of helped promote dandyism in the common people:

Since this all revolves around the aristocrat this whole phenomena is a reflection of Germanic warring society and its effects.  It all descends from this society which reflects itself in a number of themes:

Both of these figure prominently in the “macaroni”, “dandy”, and the Bourgeoisie/Victorian Culture.  In this way, it shows that Bourgeois/Victorian Culture is really a modification of the original Germanic warring society . . . its a later phase of it.  In fact, I’d say that the Bourgeois/Victorian Culture is, at heart, an aristocratic culture based in war.  The problem is that there is no war or aristocrats.  This is why I often compare this culture to Don Quixote (see my article Thoughts on the “Quixote phenomena” – ongoing effects of the Crusades).  Its like a society that is pretending that they have a great cause, and are important because of that, but really aren’t.

THE “FEMINISH” ARISTOCRATIC MALE AND THE “EFFEMINATE COURT”

It seems that there developed, in medieval times, a “feminish” quality in many aristocratic males in France.  This seems to of became very prevalent and seemed to create an “effeminate court” at times.  This seems prevalent in France and apparently spread, to a small extent, to England at various times.  When it did appear in England it never really took hold.

This tendency seems to of went somewhat “underground” during and after the Protestant Reformation and Religious Wars eras but seemed to resurface again in the late 1600’s during the reign of King Louis XIV.  Because of French dominance in the political scene, at this time, it would then spread to England and other places, particularly in the 1700’s.  As a result, these French ways influenced the English aristocracy.

Some aspects of this feminish quality seem to include:

Basically, its an imitation of some “feminine” qualities in females.  This primarily seems to be an imitation . . . they aren’t trying to “be” females, at least as near as I can tell.  I also don’t think its a sign of homosexuality.  Its like an attitude that became part of “court culture”.

I can not, at this time, fully explain why this feminish quality appeared, and why it seemed prevalent in France, but I see a number of possible origins:

What all this also shows is that the sycophancy and imitation of the Bourgeois/Victorian Culture is a product of French aristocratic culture.  In other words, the prominence of France, in the 1700’s, made French aristocratic culture the thing to do in English society.  Everyone imitated the French during this time:  their fashion, their buildings, their manners, their ways.  Even the French language would become so esteemed that it has even been called the “civilized language”.  This imitation of the French by the English created the “macaroni”.  The “dandy” would become a more English version of this French imitation.

What this reveals is that France, French aristocratic culture, and King Louis XIV were instrumental in the creation of the Bourgeois/Victorian Culture.